The 4th of July is this weekend, and people everywhere will hopefully stay safe while celebrating our country’s successful decision to throw off the rule of the British Empire.

That’s reason enough to celebrate, but there’s another type of freedom that you might want to consider for your dental practice – the freedom from dental insurance tyranny.

Whose Idea Was This, Anyway?

On paper, dental insurance sounds like a great idea, and in fact it worked pretty well for a lot of people for some years… right up until the PPOs decided that they weren’t making enough money. Then the cost-shifting to patients, the reductions in reimbursements, and the haggling over covered procedures started, and there’s no end in sight.

Faced with higher out of pocket costs, patients responded by agreeing to only those procedures that their insurance plans would fully cover.

Good for the insurance companies, bad for dentists.

To quote a well-known movie line, “This aggression will not stand, man.” At least, not if SmartBox has anything to say about it. Dentists work too hard, do too much pro bono work, and give back too much to their communities to be treated this way.

Who DOESN’T Have Dental Insurance?

There’s probably no definite answer to that question, but we can safely assume that people fall into one of three categories: those who can’t afford it; those who don’t get dental care; and those who don’t need insurance because they have the financial means to go fee for service.

It’s that last group that you want to focus on if you’re going to throw off your dental insurance “overlords.” In any given market – the percentage varies by demographic makeup – up to 40 percent of dental patients have the ability and willingness to pay more for the right dentist.

That’s not to say that those more affluent prospects don’t have insurance; it’s that they don’t consider dental coverage to be the determining factor in getting the care they want from the dentist they want. 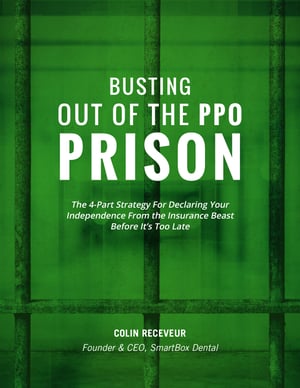 BUSTING OUT OF THE PPO PRISON lays out a clear, compelling, and proven strategy for permanently boosting your non-insurance revenue, stabilizing your monthly revenue (no more “rollercoaster syndrome”), and enhancing the value of your practice.

It’s the way to declare your independence from the dental insurance overlords. And isn’t it past time for you to do exactly that?

On this 4th of July, be resolute in your determination. Get your free copy of the report, give it a careful read, and decide whether you want to let insurers keep limiting your success.

However, we realize that dentists are really busy right now dealing with pent up demand for services. Taking on a reshaping of your practice may be a bigger lift than you care to tackle, regardless of its value.

If you’d like to discuss how SmartBox can help implement this strategy in your practice, and free you from the tyranny of dental insurance, schedule your Practice Growth Call.