It’s been a fairly long and winding road to become this Bill O’Dea.

“I have literally flown around the world,” he says, wincing slightly. “Not in one flight, mind you. But I flew west on several flights until I got back around to where I started. No, I do not recommend it.”

Holding a BA in history and English from the University of Florida, Bill lived in Great Britain, Saudi Arabia, the Northern Mariana Islands, and four U.S. states before landing in Kentucky.

“I spent a summer studying in Cambridge, UK, when I attended a local play about the 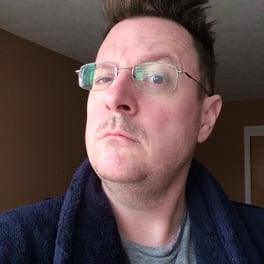 life of Shakespeare,” he recalls. “It included scenes from his more famous plays. To my surprise, it also included audience participation. I was ‘volunteered’ to play a guard in Henry VIII, and despite my accent, I was given a few lines. But they didn’t explain all of the lines, and I had to ad lib halfway through. Afterwards, the real actors thanked me and said they were impressed. That’s when I learned they were from the Royal Shakespeare Company. Technically, I acted in Henry VIII with the Royal Shakespeare Company. That’s fun to say.”

That’s not to say that it’s all been a lark. Bill’s worked as a publisher, radio DJ, high school teacher, elementary school principal, author, editor, and copywriter for an online store.

Maybe it’s all been part of his search for truth. “I’m passionate about truth. Sure, it can be a slippery devil in this day and age. But with the right amount of research and knowledge, it can often be found. I bring that to my writing job by delivering the truth about the dental treatments I write about. Of course, I market these treatments. That means a bit of spin and flavor. I still make sure the information is correct, and, when appropriate, I discuss the big picture. For example, I won’t say dental implants are expensive — but I will say dental bridges are more affordable.”

As a Digital Content Expert for SmartBox, Bill writes website pages and blogs for our dentists, always with careful attention to each dentist’s tone. He also incorporates the correct keywords for better search engine optimization. Once he’s done that, he sets his sights elsewhere. “I like to look at the bigger picture,” he says. “I’ve never been able to stay content in my own little corner of the world. Sure, I get my stuff done. Then I start looking around for more stuff to do. I find problems, and I make suggestions. Sometimes, the suggestions actually work. SmartBox is great because everybody’s suggestions are taken seriously. And I love knowing that I can get help from bosses and coworkers if I need it. I also love working from home with flex hours. Laundry has never been so easy.” 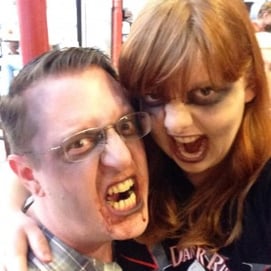 If you think that Bill has a somewhat Puckish sense of humor, you’d be right. In fact, we’re surprised that he’s not doing standup somewhere.

“I used to be the lead singer in a band called The Worst. We were. But it got me plenty of free beer, so that’s cool.” (ba-dump)

“I was raised in an Irish Catholic family in New Jersey. As a result, I am quite skilled at profanity and guilt.” (rimshot)

The result of this long and winding road to become himself is a man of great compassion and no little skill at life. “So much can be boiled down to a simple question: Will you choose love or hate? Did the waitress screw up your order? You can choose love (politely ask for it to be fixed) or hate (demand to 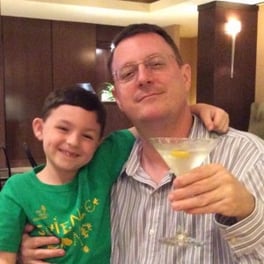 see the manager). Break up with someone? Choose love (be friendly and supportive) or hate (be bitter and angry). I fully realize life is grey, not black and white. There are times when negativity is an appropriate response. But the more I view the world as a choice between love and hate, the more I choose love. That makes me happy.”