“I’m not a scientist,” he says, “but I have a scientific-skeptical (not cynical) view of the world that’s evolved over the years. I tend to be practical about decisions, although I admit that I can overthink things. I consider myself dedicated and a hard worker, though. It’s important to me to do the best job that I can do in the time available to me.”

Stephen’s job for SmartBox entails writing blogs for our dentists. “In my mind, my primary role is to help educate current and future patients. It’s important for people to understand what services our doctors can provide and how those services can improve patients’ lives and smiles. Along with that, I want to inform patients what they can expect from the doctors we serve. What our doctors can do and how they go about doing those things are both integral to their practices.” 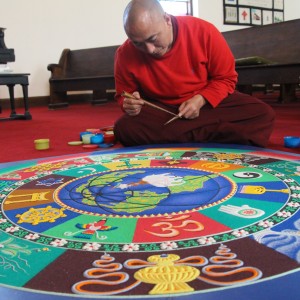 When he’s not working, Stephen enjoys reading, listening to podcasts (his favorites are “The Skeptics’ Guide To The Universe” and “StarTalk” with Neil deGrasse Tyson), and learning new things. His apparently insatiable curiosity, and his double major of journalism and religious studies in college, might explain why he made a point of meeting some Tibetan Buddhist monks when they visited Lebanon, KY last year.

His sense of dedication pre-dates joining SmartBox in September 2015. “When a 2009 ice storm hit the community where I lived and worked as the news editor,” he relates, “I spent a couple days sleeping on the floor of the newspaper office so I could update our website with information about emergency shelters and water distribution. This became more important because an electrical outage knocked out power to the local radio station. The outage covered much of our community for days, but friends and relatives were able to see our website and get out the word about what resources were available.”

Throughout his career as a journalist, Stephen won awards for editorial, column, news, and feature writing, for analytical stories and series, for photography, and for page design. He also was part of a two-person news staff that was named one of the top three newspapers in its class in the General Excellence category by the Kentucky Press Association during his last seven years as a full-time reporter.

His former journalistic life wasn’t always so “cool,” though. “I had an internship in Sweetwater, Texas,” he recalls. “While researching a story, I went to a 100,000-acre ranch so the owner could show me something related to the story. As we were leaving, he stopped his truck and got out. From the passenger’s seat, I watched him scan the ground, then pick up a large stick, which he proceeded to start swinging at the ground. After watching this for a bit, my curiosity got the best of me, so I got out, too.

“As I got closer to him, I heard a rattle. I looked down to see a rattlesnake coiled up a few feet away. It was a small snake so I didn’t feel concerned. The rancher, however, looked at me, then at the snake, then back to me. In a smooth continuous motion, he pulled a knife from his back pocket, stepped on the snake’s head with his cowboy boot, and cut off the end of the snake’s tail. He then tossed the rattle to me, saying, ‘Mail that home to your mom.’”

It’s not clear whether the tail ever made it “home,” but Stephen appears to have found a home with SmartBox.