See that beautiful model there, frolicking with a few of her friends? No? Well, your smartphone can. This billboard—and two others like it—is one giant QR code that in this case gives particular significance to augmented reality.

Calvin Klein has occupied that particular billboard space, over a prominent corner on Houston Street, for quite some time. But whereas before it might have looked like below. 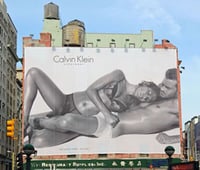 Through the end of the day it's just a bunch of big red and white blocks. Unless, of course, you have a smartphone that can read QR codes (there are plenty of apps for that). Then you're treated to a steamy 40-second ad.

QR codes have been hugely popular in Japan, but haven't caught on in the US yet other than as a means to link apps in the Android Market. But Calvin Klein and augmented reality enthusiasts are both hoping the same maxim holds true: sex sells.