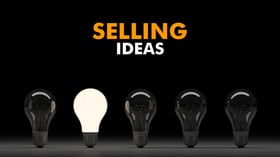 In my last blog post, I introduced the ideas of Sally Hogshead, a former advertising creative director who has worked with Coke, Nike, Target, Godiva, Rolex and MiniCooper, is a hall-of-fame speaker, an international author and a researcher into how to sell your ideas.

Ms. Hogshead says the 7 triggers that cause people to buy into your ideas are:

The first three triggers, and how to apply them to your patients, were discussed in the previous post. If you’ve not read that one, you might want to before continuing.

To reach people triggered by prestige, you want your patient to see how whatever you are suggesting is going to benefit them. To know that, you obviously need to know what they are after.

If you have a patient who wants to get rid of her dentures, is it because they hurt when she eats or because she’s afraid they’ll pop out when she laughs? Ultimately, reaching the prestige trigger means helping people see how your suggestion helps them reach their goals and ambitions.

The next of Hogshead’s seven triggers to sell your ideas is the alarm trigger.

But safe rarely is good. Boring is actually a risk for you when you are trying to present a new idea. If you are going to give solutions for a patient who is missing teeth, you should emphasize the negatives of doing nothing as well.

Sixth is the rebellion trigger.

That means making it clear from the very beginning that what you have to offer is not the standard. This prepares the person you are trying to convince to open his or her mind to something new. Here’s where the tricky part comes in: You have to know if that patient wants something new or different.

Let’s say a patient comes in with a mouthful of diseased and broken teeth but good bone density. So you might want to suggest Teeth in a Day. But in the course of talking to the patient you find out they absolutely refuse to have any kind of surgery. So what good would it do you to suggest any kind of implant? None.

However, a patient who comes in asking for dentures because his or her previous dentist suggested it may be the kind of patient with whom to begin the conversation, “Let me give you another idea that is outside the box.”

To activate the trust trigger, you have to build credibility for your idea from the start of the conversation. This may mean providing familiar examples to your patients before getting to the new idea. So if you are suggesting a patient use IV sedation, you might ask if they have ever had surgery and liken it to the experience of sleeping through it.

Analogies are another way to hit this trigger. They help people understand the new idea you are presenting. That way people see that what you are suggesting to them really isn’t so new or different after all.

If you’ll use these seven techniques, you may be able to get more of your patients to agree to your treatment plans.