Here's a simple tip that could easily save you 12 months of work:

Setting up an effective SEO campaign in a competitive market can be a long drawn out and expensive process. Worse yet, if you are focused on the wrong keywords, you might need to start over again after you find out that your site is not producing the results you want.

An easy way to avoid needing to start over is to test the value of keywords before you heavily commit to your SEO strategy. Buying pay-per-click ads (PPC) from search engines like Google (AdWords), Yahoo (Search Marketing), and Microsoft (adCenter) allow you to see what keywords have the ability to drive traffic to your site.

When I was new to the search game a client of mine told me that he wanted to rank for a list of fairly broad keywords. We were slowly moving up the search rankings, but he was not seeing much return. SEO is an investment game and it takes time and capital to build momentum. He had a rather low budget though, so it was taking months to see little response.

I could tell that things were not working out as well as either of us planned, and suggested we shift his budget over to AdWords to see what keywords are most valuable for his business. It turns out that the keywords he told me he wanted to rank for had very little value to his business. If I bid more than 15 cents a click for any of them we lost money. But there was a line of products he sold that had some related keywords which people converted on at a great rate. We could afford to pay $2 a click for some of these keywords and still make profit.

In late 2004 we adjusted his SEO strategy to match what worked well on the pay per click ads. When the economic downturn happened in 2008 and 2009 many competing businesses went out of business. Had we not used AdWords to test his keyword strategy his business would have likely went under as well. But he still ranks at the top of the search results because his SEO strategy was focused on what keywords worked well for his website.

Test a Variety of Keywords

Not every keyword you try will be profitable. But if you try a variety of keywords tightly related to your business you are far more likely to succeed than if you only bid on 1 keyword. Most businesses should test at least 5 to 10 different keywords, while retail oriented businesses should test a much larger set of keywords, driving traffic to the most relevant page whenever possible.

All the major PPC ad networks have built in conversion tracking tools which show you what keywords and ad groups convert well. You can also pass the conversion value through to these tools to know exactly how much business came from each ad campaign and each keyword. 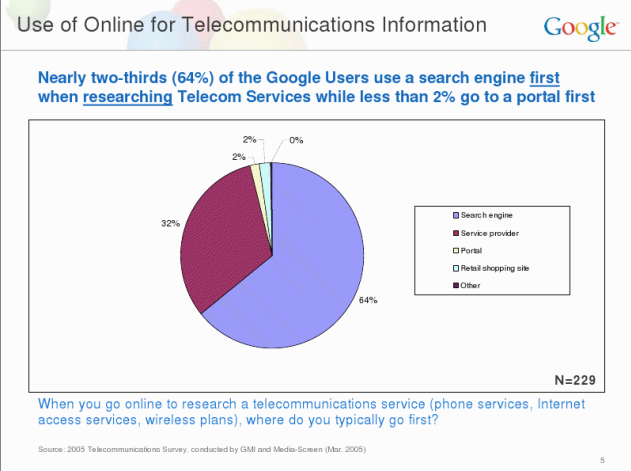 A point to note: the above slide from Google's internal study is actually from 2005.Â  As of June 2009, the percentage of people visiting a search engine first has skyrocketd to 82%. In the above groups I also used obtuse campaign names to prevent you from knowing what site this data is associated with, but note that

If tracking conversions is hard, you can place a link to a coupon (or some other free offer) on your landing page and view a click on that coupon page as a proxy for conversion and user intent. Some more sophisticated strategies involve setting up different 1(800) phone numbers based on the marketing channel or keyword.

Where to Start Testing With Pay Per Click Ads

For most businesses the best way to start pay per click advertising is to test your ideas on Google AdWords and then carry the best results over to Yahoo! and Microsoft.Â  There are a lot of smaller ad networks that sell traffic as well, but most of them have low traffic quality, so they don't help you save money and they do not offer representative market feedback. For most advertisers the smaller ad networks are a complete waste of time.