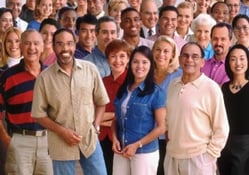 Gallup completed a survey in 2013 about dentist visits and contrasted the results with the results from a 2008 survey.

The big news is that some 35 percent of U.S. residents don’t see a dentist in the course of a year. That’s a huge untapped market. I covered the results by race in my previous post. Let’s examine the results by two very important demographics to help you zero in on new patient prospects.

The older you are, the MORE likely you are to go to the dentist…

UNTIL you reach age 65. Then you are less likely than all but the youngest group.

Here’s how it breaks down:

There are lots of factors at work here.

Maybe this is based on affluence, with the idea that that older you are, the more money you have to spend on things like dentistry UNTIL you get to retirement age, when you want to conserve your nest egg.

Maybe it is because the older you get, the more dental problems come to the surface and the more you NEED to see the dentist, UNTIL you get to 65, when some people are willing to accept that they may start losing teeth.

There are probably many factors involved.

Even more interesting than the numbers, though, are the differences in just those five years.

There are any number of reasons for these changes. But no matter what the reasons, they come with opportunity, especially those aged 65 and older.

Money may not buy happiness, but it does buy dental appointments  – at least according to results of the Gallup poll. The percentages of people who went to the dentist based on income isn’t that surprising.

The higher your household income, the more likely you are to go to the dentist.

Gallup broke the incomes down into eight categories by about $12,000 increments, and the percentage who went to the dentist went up as income went up. I won’t bore you with all the details.

But here is where it gets interesting.

Almost all of the eight income categories saw some degree of decrease from 2008-2013, and it bell curves right in the middle

So do we look at those in the $36,000-$48,000 annual household income and say they were hit hardest by the economic downturn? Maybe. Again, there are probably multiple factors to consider.

Next Tuesday’s post will look at results by location and marital status, and on Thursday I’ll discuss how to use these numbers to attract more and better patients to your practice.