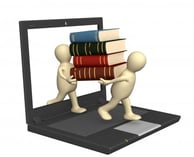 Last year, Time magazine had a piece from the CEO of a data analytics company with some numbers that may disprove several things we think we know about online readers. In fact, the article in Time was set up as debunking myths.The findings are interesting.

The first is that readers across 2 billion website visits in the course of a month found that 55 percent spent less than 15 seconds on a page. That means they weren’t reading the page, they were scanning it (at best). So just because someone clicks a link doesn’t mean they are reading the page. Something to keep in mind the next time your web company tells you how many clicks you got.

Third, people aren’t fooled by “native advertising.” Native advertising is paid copy on websites that looks and feels like the content of those sites. In the print media, this is called an advertorial and you’ve probably seen it – it looks like a newspaper or magazine page, but is really about a company or product. Your advertising company may have tried to get you to do this before. According to the Time article, it doesn’t work. On a typical page, 71 percent of people scrolled down the page of actual content, while only 24 percent of people did so for native ads.

Finally, the research showed that more people than you think scroll beyond “the fold.” This digital fold is the point of the page where you have to scroll down to see what is beyond it. Conventional wisdom says that most people only read what is on the screen when they land on the page. What the research shows is that 66 percent of attention on a normal page is below the fold. This means people are willing to scroll for the content they are looking for.

Research by PhD Jakob Nielsen shows that the average page view lasts A LITTLE LESS THAN A MINUTE. Think about your web pages: Can someone reading them get the message you want them to have in less than a minute? Don’t panic.

Dr. Nielsen says average isn’t a good way to measure engagement in a page anyway. Data from Microsoft Research show that page visitors are most likely to leave before they have been on the page 10 seconds. So they are making an almost-immediate decision on whether to stay on the page or to move on.

People are also more likely to leave in the next 20 seconds: they’ve read a little, then started scanning, then decided to move on.

BUT, and this is a critical thought, if they stay on the page for 30 seconds, they are VERY LIKELY to stay on longer.

So what does Dr. Nielsen surmise about this? If you can capture them in the first 10 seconds, you are likely to get them to read your whole message.

These numbers are very similar to those about video from a previous post. Video is one of the best ways you can get their interest in the first 10 seconds.

Obviously a strong headline on the page is critical to keeping their attention.

And a strong opening to any text that talks about prospects and THEIR problems is a good way to keep them reading more.

Prospects who invest the time in learning about what you do and who you are also more likely to turn into staying, paying and referring patients.