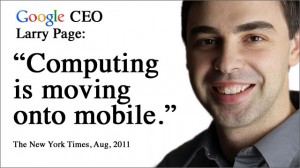 No longer is there a "standard" mobile device.

If you look at a cell phone back in the 90's, they all looked about the same: like a brick. A big brick.

As the phones evolved in into the early 2000's, all the different manufacturers still produced phones with similar screen sizes... around 3.5 inches.

This was the beginning of mobile dental websites -- building a custom website SPECIFICALLY designed to run on those small screen mobile devices.

These mobile dental websites were sometimes built separately from the regular websites (really bad idea, but that's another story) and other times they were built together, but they only were built for ONE SIZE (~3.5 inches) because all the phones were roughly the same size.

Then came the tablets: iPads and Kindles and Androids, oh my!

Then came the "Jumbo" mobile phones, like Samsung's Note 2 with a 5.5in screen in a cell phone.

Seriously, the Note 2 is bigger than some of the phones of the 90's!

With all these different screen sizes, mobile websites struggled. The regular website was too big and the mobile website looked ridiculously small when using a 7in Kindle or a 9in iPad.

So how do you build a mobile dental website that looks great no matter what size screen?

Responsive websites are built to adapt to whatever screen size they are being viewed on.

Even if you change the size of the window while viewing it, a responsive website will adapt on-the-fly.

No longer do you have a "mobile website" with responsive design.

Check out this video for a live demo: